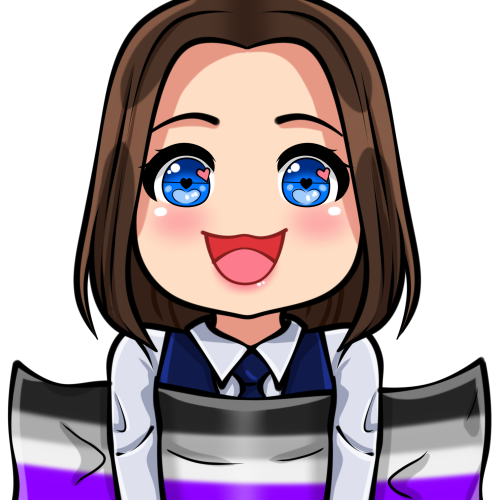 I’m not sure when Stef became ace.

For those of you who know the deep time history of the series, back when this was all Matrix fanfic, Stef’s old incarnation wasn’t ace.

She was geeky and awkward and not exactly hitting up Tinder every night, but she showed no signs of being ace.

Some of her awkwardness around sex and lack of swiping right was undoubtedly a product of her writer at the time – when I was younger, I was…extremely sheltered.

I was brought up by my grandmother who always said “boys are for later” so I kind of had that bit of myself repressed to the point of atrophy.

So, believing that you should write what you know, and feeling awkward as hell about writing relationship stuff… it left Stef without that side of herself largely unexplored.

Later in the series, she did get a boyfriend, and I got comfortable writing what amounted to a couple of kisses and a fade to black.

Pulling out of deep time a bit as I went through that miasma of time that involves the twenty or so rewrites, the different world builds, and… a focus on her relationship/s was never a real big part of the planning stages.

Because of how I imagined the series going, if an analogue of her fanfic boyfriend was going to show up, it wasn’t going to be until a couple of books in.

And this was at a point where I was still flipping a coin as to whether A&B was going to be urban fantasy or cyberpunk, so if/when she was going to get her kisses in wasn’t at the forefront of my mind.

I also wonder if that should have been my first clue that she was developing without me realising, that surely when most authors sit down to plan a series, the potential partners of their main character should at least be somewhere on the drawing board.

I think part of my defence at the time, if I’d been asked, was that I was writing a series that I didn’t want to be defined by its romantic sub-plots.

The miasma time came and went and MF1.0 arrived.

If you go back and read MF1.0 (which is available for posterity, but…I can’t recommend it), Stef is still very much half-baked cookie dough. She’s a lot closer to the hopeless dirt child that we know and love than the one-liner quipping Matrix version of her that existed prior.

She’s…almost there, but not quite. This also goes for other things like her swath of mental health issues – hell, in the first version of 1.0, bold voice and Spyder aren’t used correctly half the time.

In terms of relationships, there was still that nebulous future to aim towards – nothing to worry about in the first book or two.

Sometime after 1.0…the concept that she was ace just…crystalised. In the way that writers say that characters tell you about themselves or have lives of their own…this was one of those moments. I hadn’t been thinking about Stef’s love life, because it was the furthest thing from her mind.

And once that realisation came, it began to colour everything around it, and be coloured by it in return.

And now I guess it’s time to talk about nuance.

There’s this unfortunate tendency for asexual characters to come out in one of a couple of different cookie-cutter shapes. There’s the classic robots, aliens and otherwise inhuman representation (causing the twins cries, I believe, of “why are all aces robots/fuck yeah, I’m a robot!”) or if they are human, are stoic, intellectual, uncaring assholes.

There’s a crossover, somewhat, with the celibate smart-man archetype, as a lot of people don’t understand what asexuality is.

It’s nothing more or less than a lack of sexual attraction. That’s it. It doesn’t dictate or indicate any other personality traits – especially how that person will act in relationships (platonic, romantic or otherwise).

It’s also separate from aromanticism – aroaces are common, but it’s not a mandatory pairing.

Stef, for example, is a panromantic asexual – or, as she’ll say at some point later in the series “I’m a pancake? Oh no, I’m delicious…”. She never seemed to me to be someone who would have her heart exclusively reserved for dudes, thus she officially became a pancake.

[Behind the scenes extra: in one of the original plans, I was going to have her get together with an adorable little butch agent named Marty, sadly that plan went by the wayside.]

Stef’s not uncaring – and I wanted that to be something obvious about her from pretty early in the series. She’s this paradoxical mix of a cynic and a romantic – she knows exactly how bad the world can be, because it’s kicked her down so many times; but she’ll also have these moments where she tries to see the world through an idealised lens, or liken something to a storybook.

She’s been hurt a lot, but once you scrape away the fear, there’s this trembling young woman who just wants to be able to connect with people. She wants family, she wants friends.

One area where I feel like I do fall into the tropes a bit is that she feels that she’s broken. Aside from one childhood kiss, she didn’t have any relationships or crushes growing up, never felt anything for anyone “in the pants way”, and therefore just assumed she was broken, and therefore, destined to be alone.

While this is a trope, it’s also common enough (becoming less so, thankfully, as information becomes more widespread. All it can take is one label, one word, one explanation to stop someone from feeling wrong to understanding where they fit). Unfortunately for her, she never encountered the information in a way that felt like it applied to her. (Something along the lines of “oh, those ace people are normal, and it’s normal for them to feel like that…but I’m this horrible, broken creature, so obviously this information I just learned doesn’t apply to me).

The next section will have vague spoilers for later in the series. Be warned. (And use the spoiler tag if discussing this in the comments below or on Discord).

At a later point in the series, Stef will get into a relationship – and to keep things vague, let’s call her partner Marty, after the never-was plot discussed above.

There’s this unfortunate habit in fiction that sex can cure anything whether it be trauma, fatal wounds, poor ratings, or a lack of interest. You know the trope, with the most common form being the aggressively hetero hero with his…nearly-magic longsword transforming a blushing virgin into a thirsty, thirsty woman who wants to bang in every stable and inn.

I mean, do I even have to say I want to avoid that gross trope?

Exact details are pending the rewrite, of course, but among the important things I wanted to show in the Stef/Marty (Smarty? Smarty!) relationship was Stef navigating her own boundaries – coming up against what society impresses on people (especially women) is expected of them in a relationship, and that they should likely to be expected to act outside of their comfort zone for the sake of their partner.

Take that, and add to it the complexity of being an allo/ace relationship where a lot of ace people also feel the pressure to give their partner what they “deserve”, that they shouldn’t “deprive” their allo partner.

Add to this Stef being in her first romantic relationship, where she doesn’t necessarily have the language or toolkit to navigate situations like this – and it leads to thoughts like “should I just lie back and think of England?”, “may as well get it over and done with, I’m not going to enjoy it anyway” and other self-imposed worst-case scenarios.

Luckily, Marty is smart enough to see the stressful thoughts going through Stef’s brain, and – as should be the expected bare minimum – lets Stef approach things at her own pace.

Which brings in one of the things I really want to highlight with Stef and the Smarty relationship – the intimacy isn’t just smashing genitals together; that intercourse is far from the only way to feel close to your partner, and even if it feels nice, sometimes just cuddling and talking to 1am before drifting off can be even better.

No matter how it came to be, it’s now something I can’t see Stef without.

Like so many parts of Stef, it’s something that’s she’s going to take a while to come to terms to, but be stronger for it – that she’s valid, that she has a place she fits, she’s going to much happier.

She’s not broken, and – if you can relate to her – neither are you.

Your example of Stef certainly was helpful in me realizing I was ace, as well. The clue stick took me a bit longer—I only realized it about myself due to a character of my own that turned out to be the same sort of aro ace that I am.

(Others made so much more sense once I realized that, contrary to what I’d been told all my life, I wasn’t straight, and most people did not share my lack of libido. And to be honest, from my religious upbringing and various pervasive arguments about relationships that are made there, I suspect that asexuality is actually far more common than is recognized and acknowledged.)

As an aromantic asexual, myself, I often find myself having to explain that aromanticism ≠ asexuality ≠ libido ≠ willingness to have sex.

It’s 100% possible for someone to be entirely aromantic asexual, without any sexual urges, but still have contexts in which they’d be willing to have sex. (I’m such a person.)

It’s also 100% possible for someone to be heteroromantic heterosexual, with sexual urges, but still be unwilling to have sex.

There are all sorts of reasons that persons might have, want, or be open to having relationships that are romantic and/or sexual. Non-platonic attraction itself (usually?) isn’t enough to maintain a non-platonic relationship, so why do so many assume it’s even necessary to begin with?